The other day I ran across this fascinating collection of graphs by designer Jonathan Corum, charting the use of various words in hit singles between 1958 and 2006. Using a database of more than 10,000 songs that appeared in the Top 40 of Billboard’s Hot 100 singles chart, Corum counted the number of times such words as “boogie” and “ho” appeared in the lyrics. The tallies are displayed by year, offering a glimpse into the ways that trends have developed and morals have changed since rock ‘n’ roll and hip hop became pop-culture forces.

For most of this period, “love” was by far the most common word in song lyrics, although there has been a precipitous drop in its use since 1989, allowing “baby” to overtake it for most of the last decade. Looking at the “love” graph, I thought its shape looked somewhat familiar. Following the lead of lazy, irresponsible journalists everywhere, I decided to use some superficial similarities to imply causality and created a graph of my own: 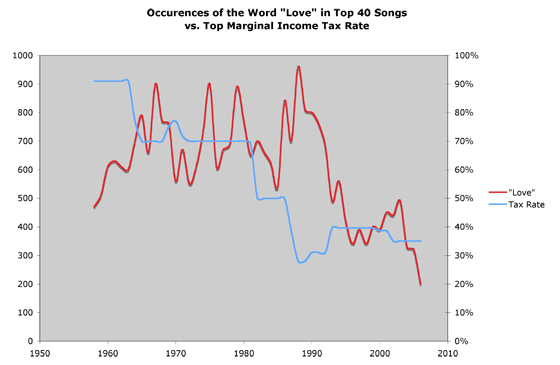 The two curves didn’t match each other quite as well as I’d been hoping, which either meant these two variables are completely unrelated or there was a lag of about 10 years in the reaction of pop songwriters to Ronald Reagan’s trickle-down tax policies.

But then I noticed the graph for “damn” or “damned,” and once again it seemed awfully familiar. This time the results were far more (ahem) damning. 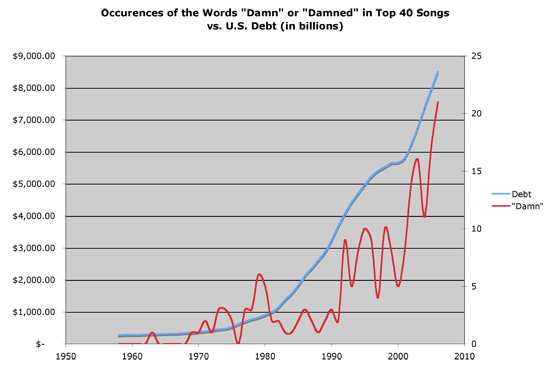 As you can see, America’s debt didn’t start skyrocketing until those no-account Bay Area troublemakers in the Kingston Trio charted with “Greenback Dollar” in 1962.

Coincidence? Perhaps, but I don’t think that should stop Tea Party Republicans from railing against the ’60s folk revival. It makes as much sense as their reasoning regarding climate change. Come to think of it, a line showing rising carbon levels in the atmosphere would fit right in on that second graph. I’ll leave that to someone else. I think my work here is done.