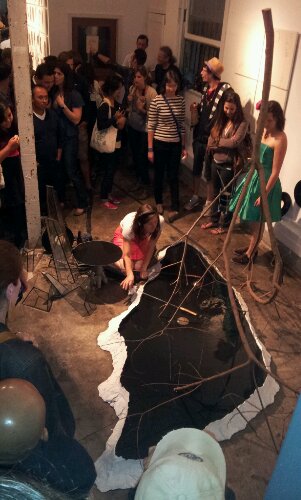 Underwater DJ at Hatch Gallery during tonight’s Art Murmur in Oakland. Don’t ask me what spinning your records in a puddle does for you–other than attract a crowd.

UPDATE 06.02.12: I don’t know who the ladies who were operating the “kinetic turntable installation” were, but it is the work of Oakland artist Evan Holm. Here’s what Hatch’s website has to say about it:

Completely new to his body of work are the kinetic turntable installations. Created out of conglomeration of the organic and inorganic, this project creates an interplay of sound and visual information which produces a broad range of intrigue and emotion.

So that’s what it does for you. Now we know.

I was also a pretty big fan of Holms’ piece Transistor Hive, which featured this white wrought-iron box thingy with a bunch of transistors on fishing lines going up and down between sets of spinning bicycle wheels, the lower of which was making tracks in a pile of flour … or something like that. It’s hard to describe in words, which is why I probably ought to stick to pretending I know what I’m talking about when it comes to music and leave this sort of thing to those who pretend they know what their talking about when it comes to visual arts.

One Reply to “Well, There’s Something You Don’t See Every Day”